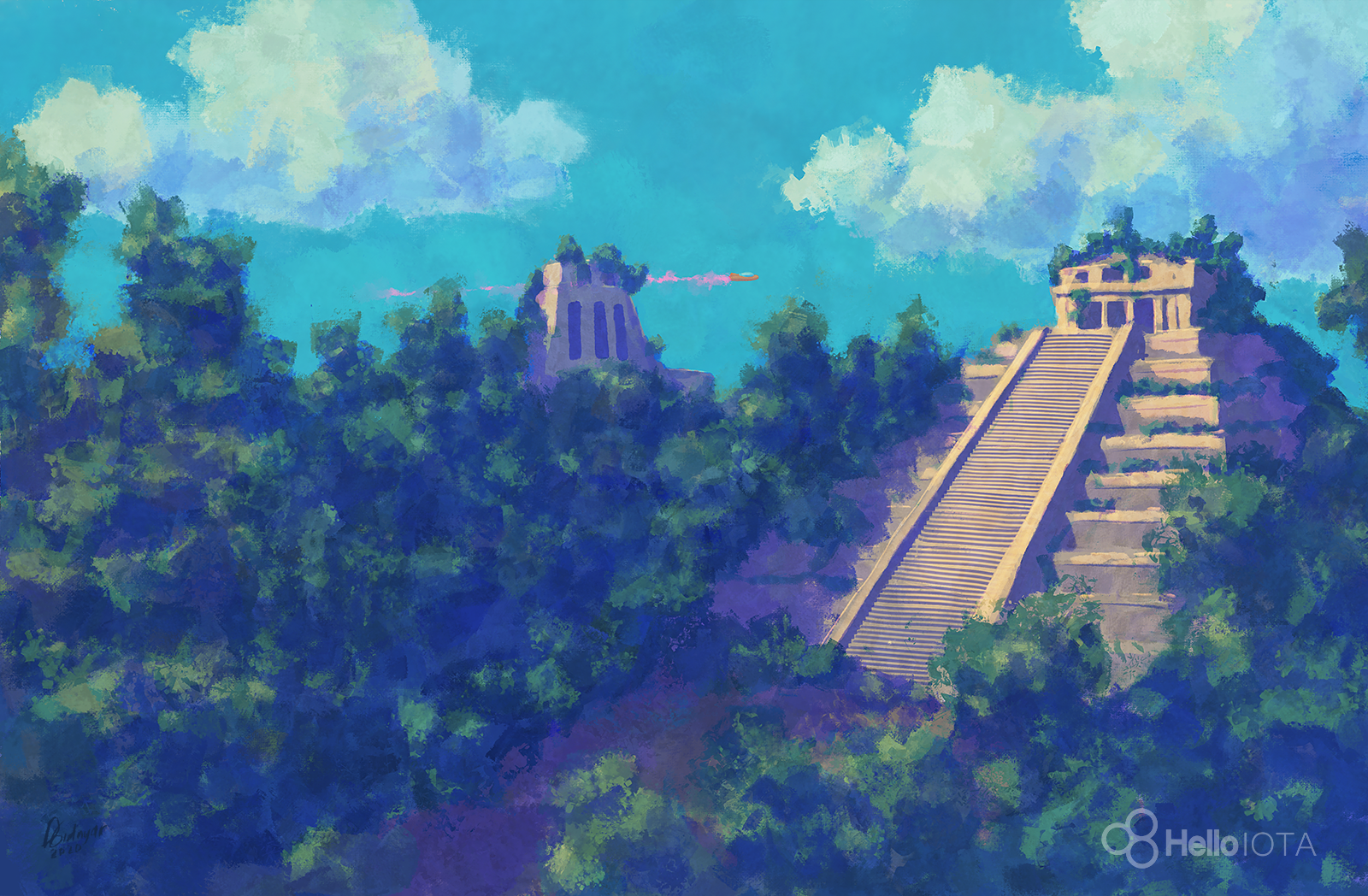 "Mayan civilization" was never an empire in the traditional sense. The Egyptian, Ottoman, Aztec, Mughal, Roman, and British Empires were by the book "empires" - according to the dictionary - "an extensive group of states or countries under a single supreme authority, formerly especially an emperor or empress."

No, the "Mayans" were an experimental civilization more reflective of a distributed collection of independent projects than of a monolithic empire.

Mayan civilization began as a loose collection of villages in the lowlands of the Yucatan Peninsula circa 2,000 B.C. Unlike that of its neighbors in the highlands, Mayan geography lent itself to dispersion of cities which became experts at cultivating terraced agriculture in their tropical climate.

The Maya developed the most advanced written language of the region in the form of glyphs. They invented "monumental architecture", characterized by the construction of massive pyramids and temples for astronomical and religious purposes. They invented two calendar systems, advanced mathematics, and some of the most accurate pre-telescope astronomy in the world.

And they did all this while remaining decentralized. They were never all brought together under a unified ruler. A consequence of this decentralization was the maintenance of numerous dialects across the region: Tzeltal was spoken in the western part of the peninsula, and is still spoken by hundreds of thousands of people today. Kaqchikel is closely related to the Tz'utujil languages. It's more prominently spoken in the western part of the peninsula, and like Tzeltal, counts hundreds of thousands of modern day speakers. K'iche' is related to Kaqchikel and was spoken in the central highlands. It has become the second most widely spoken language in modern Mexico, with millions of speakers. Some local Mexican governments in modern-day Mexico are even starting to push for higher literacy by teaching these languages to children at school.

At the time, this broad region of people didn't call themselves Mayans. "Mayan" is a categorical term we've invented in modernity for anthropological purposes in order to simplify our language when studying that time period.

The independent, distributed, non-centralized theme ran deep on the Yucatan Peninsula. Inter-city roadways were easily constructed in the next-door Central American highlands owing to the consistent elevation and relatively hospitable terrain. Mayan cities were not on those highlands, however, therefore making it almost impossible to construct roads that could connect every city.

Among the handful of cities that were lucky enough to find themselves positioned at a rare heavily-trafficked crossroads, competition flourished. Mayan cities directly competed with each other for economic prominence. Well placed cities along trade routes had the advantage of being part of the chain of commerce. These cities originally arose by virtue of their lucky locations along trade routes, but among them it was those who put their resources toward building large temples and other amenities that were able to offer a better quality of life than living in the lowland countryside of the lowlands. Offering a higher quality of life attracted more citizens, which in turn produced more goods, and allowed those cities to accumulate more wealth and power.

By 500 B.C. the large cities were producing titanic architecture. Large city centers usually contained large ceremonial buildings like pyramids that functioned as temples. We've come to identify the flat-topped pyramid with central American societies; the Mayan and Inca would put temples on top of their flat-topped pyramids. City priests would make the arduous climb up the pyramid's stairs to the temple at the top, and large scale public religious ceremonies were held. Surrounding the temples arose administrative buildings, ceremonial ballcourts, palaces, and various astronomically aligned structures all surrounded by haphazardly placed residential areas, and all linked by sacbeob. A sacbe is a "white way", or a road paved with white limestone stucco.

Cities that grew in power and wealth started to compete with each other along the spectrum of specialization. Some carved out a niche in administration, others in commerce. Manufacturing expertise and religious expertise also characterized some of the most successful estates of Mesoamerica. Since there was no unification, life was punctuated by constant small battles between cities. Tribal warfare was commonplace.

Tikal was the biggest city state, with an estimated population into the hundreds of thousands. An almost impossible number to believe for this time period. Caracol is estimated by Chase & Chase to also be in excess of 100,000 people! How did they survive in such great numbers despite living in such unfavorable farming conditions? Chase & Chase give us a glimpse:

The inhabitants of Caracol sustained themselves through widespread agricultural terracing interspersed between households —techniques that could be used today to enhance agricultural productivity. Community integration of this large population was achieved in a variety of ways visible through settlement and landscape analysis. Besides the capital investment in agricultural terraces throughout the city, Caracol’s landscape is infilled with regularly spaced residential groups and a series of dendritic roads that integrated the continuously distributed population with the epicenter of the site; the roads also connected the site’s inhabitants to an economic system focused on strategically located marketplace plazas where both foreign and local goods were available. The general settlement pattern consisted of independently situated residential plazuela groups, 50–200m apart, located within terraced agricultural fields. widespread distribution of imported goods among the Caracol populace could be viewed as manifestations of wealth and was likely the result of a purposeful management strategy by the elite that focused on symbolic egalitarianism, in which most Caracol inhabitants had access to the same resources and ritual items, derived at least in part from a functioning market economy.

The state of distributed ledgers today can be modeled by the ancient Mayans surprisingly well. Few roads connect Bitcoin to Ethereum to IOTA. The prime directive of cryptocurrencies in general seems to be "decentralization" and "independence", which means that unification is not a likely outcome, and this has led to many small-scale spats between communities that fancy themselves competitors to the "others".

Inter-city Mayan roads can be likened to the more theoretical hot trends of today. Five years ago the hot trend was "blockchain". Any "city" (protocol) that best aligned itself with that trend was able to ride it into mainstream commerce and outcompete other protocols. Three years ago it was "internet 3.0" that took over the zeitgeist. Now it's "DeFi" that's hot. Whatever protocols market themselves with the right words at the right time are the ones that seem to get their time in the spotlight.

Just like the Mayan cities, however, it's all about what protocol is able to take advantage of its positioning along inter-city roads (crypto trends). Building temples, administrative buildings, ballcourts, marketplaces, and houses draws the smartest people into your city. The same concept applies to crypto projects. The marketing puts you on the right intersection, but the hard technical work is solidifying your competitiveness with the other cities in similar positions.

Looking around the DLT space, it's obvious that some projects have taken advantage of their time in the spotlight by solidifying their vision, building out their teams with smart driven people, and establishing an excited organic community. Many others clearly have not (marketing is easy. executing is hard).

IOTA is an example of the former. The IOTA vision has been clear from the very start - to build the backbone of a future machine-to-machine economy. Something as simple as long-standing high-conviction vision is a rarity in the DLT space, and honestly in any area throughout industry. This has given IOTA the advantage of consistent messaging which lets the IOTA project find serious people who are aligned with what they're trying to do. This naturally leads to building a great team.

The IOTA Foundation team starts with the four board of directors that everyone probably knows well by now. More importantly, there's a large team of people who work full-time to bring IOTA to life. You might not realize there are 75 people professionally building IOTA, not including advisors. At least 27 of the team are software engineers, the lifeblood of a technology project (more than 27 if you start to count team leads, UX/UI designers, web designers, etc.). These engineers have pumped out 141 repositories on the public IOTA github, with more probably happening privately.

10 members of the team are research scientists, of whom 8 are PhDs and 2 are PhD students. Their PhDs were obtained in a diverse array of places - Germany, Brazil, Russia, France, Poland, Italy, the UK, and the US. Research specialties include commutative algebra, category theory, dynamical systems, game theory, pure mathematics, graph and queuing theory, symmetric polynomials, applied cryptography and security, and probability theory and stochastic processes. One of the IOTA research scientists even completed his PhD in particle physics as part of the Stanford Linear Accelerator Center research group. These scientists are distinguished professors, winners of international math competitions, hold multiple prestigious prizes in their fields, and publish prolifically.

Observing crypto twitter and crytpo reddit, it seems like the wider crypto community (and even large portions of the IOTA community itself) is unaware that IOTA has compiled such an impeccable hard-tech team. To put the strength of IOTA's team and vision into perspective, let's look at some comparable projects by market capitalization:

Neo has 9 members on the core team which includes a few developers, 2 researchers, and 2 security analysts. The Neo github has 19 repositories developed by 13 people. NEM's github hasn't had any activity in months on any of their 32 repositories, and their website only lists a handful of their leadership team. Aave has a team of 21 people which includes 8 software engineers and zero researchers. They're full of marketers and operations people, and their github is sparsely populated with 13 repositories. VeChain lists 14 members with only three technical specialists (researcher/engineer). Their github has 3 people working on 47 repositories. It's unclear what Huobi even is.

There's a land grab going on in crypto, just like there was on the Yucatan Peninsula. The cities that were able to position themselves along highly traveled trade routes were able to lure the most talented people, which created a flywheel effect that created better cities and lured in more enthusiastic citizens.

When looking at other projects, ask yourself if a project is truly revolutionary if they've got three engineers working on repositories that haven't been updated in months. Can something be groundbreaking if it doesn't even have researchers working at the edge of human knowledge? More operations and marketing people than engineers and researchers is a sign of what the project actually is, and is an immediate sign that the hard-tech isn't actually interesting. People in technology can see this, and choose to join projects accordingly. The most exciting technological challenges inevitably attract the most brilliant minds.

IOTA is positioned perfectly along the trade route of data/IoT. Having already compiled an elite technical team pursuing this daunting goal, it's well on its way to creating the coveted flywheel effect of Mayan city competition.

Let the games begin, and let the most ambitious projects win.