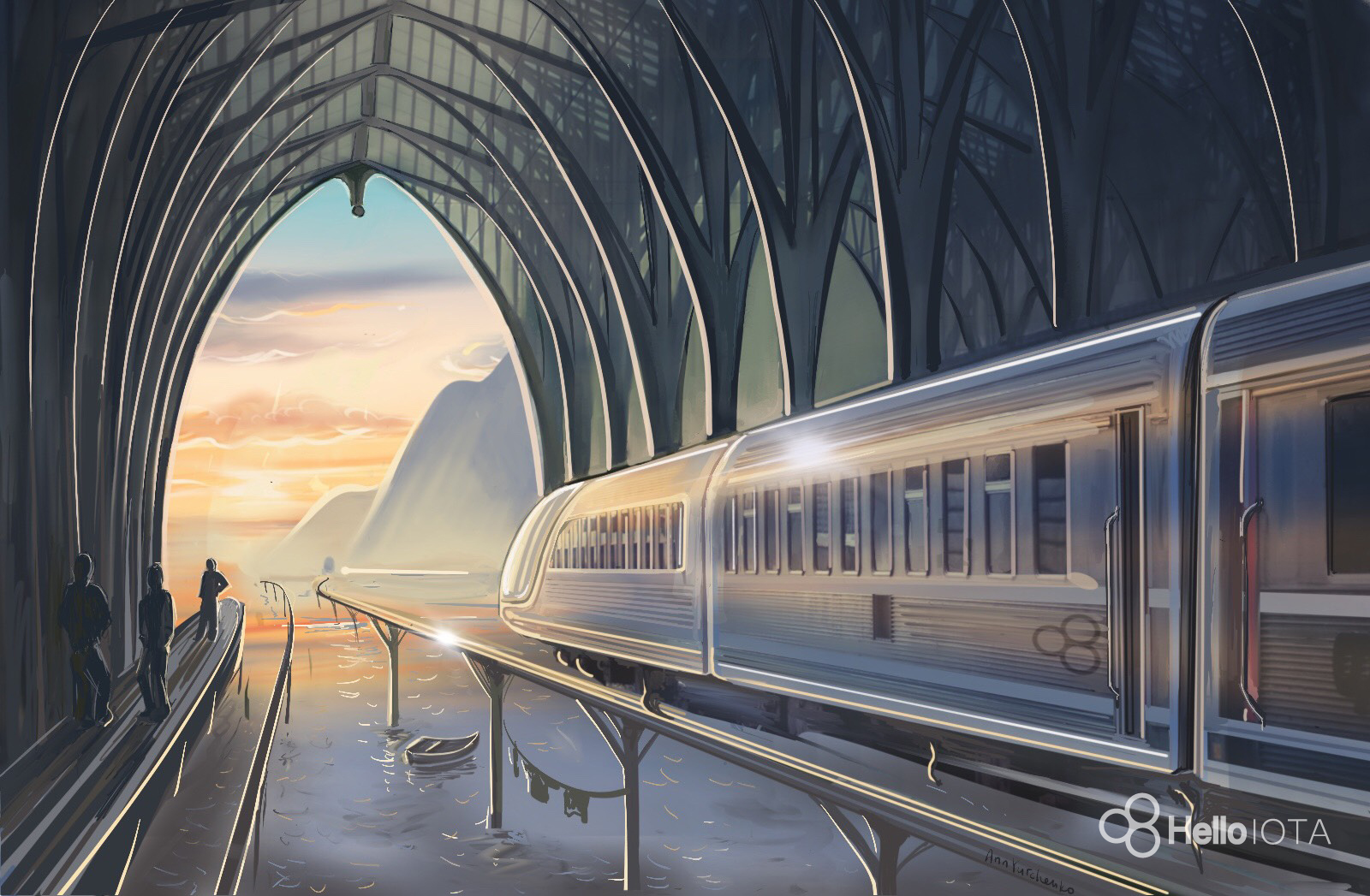 Scroll through the verticals on iota.org and you'll find the seeds of a wonderful future that undeniably sprouts into harmony and peace.

The social impact category paints a future of sustainability by way of IoT derived natural resource management. No more wasting of crops, guessing at pesticide amounts, or being ignorant of soil conditions across vast fields. Digital identity can interface with borders, and help create citizens of the world rather than arbitrarily geographically tied humans who are forbade from going to and fro without extensive bureaucratic intervention. Even locally we can improve governance models and public services with futuristic sounding ideas like .. gasp .. ranked-choice democratic voting. Or maybe even something more ambitious like liquid democracy (go read Dom's 2015 thoughts on liquid democracy).

In mobility, vehicles will have embedded wallets that let them form markets for every type of interaction we encounter on highways. Daimler wrote about truck platooning. Episode 13 of Untangled was on the topic of platooning, and they describe it well. Vehicles are able to autonomously organize themselves into a platoon (a line of cars or trucks that follow each other so closely that every vehicle behind the first in line benefits from the aerodynamics of drafting). Apply that to a platoon of trucks, and something like this emerges: "Only the leader of the platoon will be controlled by a person, while the rest of the vehicles are driving autonomously. By using the Tangle, the platoon leader can get compensated in real-time for the leading efforts." Electric vehicles have burst onto the scene, so smart charging and smart paying (streams of IOTA payments for each discrete amount of charge electricity, in real time) seems like a reasonable step. Car insurance whose rate varies based on individual usage will make driving safer and cheaper. Terry Shane even presented bIOTAsphere's proof of concept!

Many pundits claim that this pandemic has marked the end of cities! Could the past few months have changed people's long-term living preferences? Sure, but don't bet on it.

It's clear that, when viewed on a larger time scale, cities are viewed as being just as vital to civilization as ever. Look at the shape of those curves rather than the absolute amount - absolute levels are just the inflation breaking through to the surface. Joe Cortright deals with this subject masterfully.

Smart cities are the next step in how our species organizes itself. Urban mobility management will give cities the ability to redirect traffic flows, place traffic lights, and systematically create a safer travel environment by incorporating real-time data and markets like never before. The most advanced metro command centers today will look like landline telephones in twenty years time. City-goers will be transacting peer-to-peer on open marketplaces at all times, pushing us even farther toward a zero marginal cost reality that elevates living standards for everyone.

If you told a global trade analyst or manager that trade would be smooth and efficient 25 years in the future, they would laugh in your face. Impossible. But why not? We have the physical infrastructure, and will now combine it with IOTA for item provenance throughout the chain. We'll slap a sensor on that box of frozen fish, and we'll know the exact temperature along every point in the shipping process. Trade certificates will be put onto the Tangle, and all of the sudden, international exchanges will be frictionless. Digital twins are something we've both written and talked about before, so they must be important. And they're happening already.

These ideas culminate in the ultimate vision of IOTA, which is that the Tangle will be the backbone of a machine-to-machine economy. Humans and machines will freely transact in data and currency. It'll look insane to kids born in 2057 that their parents had to swipe a card or click a button to pay for potatoes at the grocery store. They'll ask us what it was like to pay a "bill", because in a society that streams payments in real-time, that'll be a foreign concept. Your car has an income stream from autonomously renting itself while you aren't using it, so why would it cost you money to pay its insurance?

A vision that's equal parts technologically challenging and socially challenging, yet it remains so tantalizing because of the way that idea of the future feels when rolled around in optimistic, empathetic minds. When you think about it, it's so tantalizing precisely because it's such a great challenge, for if it had been easy to develop the technology, build the ecosystem, and win mindshare, then we wouldn't be talking about any of this right now. We'd be living in it.

Think about this. Humans have only known how to solve the Byzantine generals problem for barely more than ten years. That means we only just discovered digital scarcity. Merely a few years before that we invented the smart phone. And a few years before that social media - also known as "scaling social interactions from tens into the billions". The fact that you can walk around your neighborhood right now and almost certainly have lunch with someone who lived in a time when the internet didn't exist.

You see, tomorrow will look dramatically differently than today. We can say this because today looks dramatically different than yesterday. It seems like a safe enough assumption, or even a logical conclusion that something cool will have changed our lives ten years from now, although everyone agrees that it would be silly to try to predict what exactly that something will be. Bill Gates says that we always overestimate the change that'll take place in the next two years, but underestimate the change that'll take place in the next ten. That quote couldn't ring more true when looking back at newspaper clippings from bygone decades.

But here's the punchline

The future doesn't build itself.

People build the future. People like you and I.

You're reading this on a screen right now; that screen is being powered by electricity which is produced and transmitted by methods that have been honed over many lifetimes. We take for granted the fact that plugging a cord into the wall makes our computer come to life. Well, some bloke had to come up with the very backbone of that entire process. There was a day and time that seed was planted in some real human's mind. Imagine living in 1821 and having a friend named Michael Faraday, who one day showed you a coil of metal wire, a magnet, and a vial of mercury. He's overjoyed and can't wait to tell you about what he found last night: when he puts the ends of the coiled wire into the vial of mercury, and then dunks the magnet into the mercury, the coiled wire rotates around the magnet. He's so excited because he learned in lecture last month that Hans Christian Ørsted had discovered the opposite side of this phenomenon, that a compass magnet deviated when in close proximity to electricity (lighting was recognized as an electrical phenomenon in 1750), less than a year prior. It must have something to do with that.

Those of us who studied electricity and magnetism in physics class are conditioned against seeing the profound mysticism of that experiment, so we need to slow down and truly imagine ourselves being there in Michael's workshop in 1821. It's a Thursday evening before dinner with your family. You walk over to Michael's house, and he takes you to his workbench. Over a cup of Bohea tea, your 29 year old neighbor shows you a piece of metal that spins around another piece of metal. You chat and then walk back home, eat dinner, and go to bed.

While you're laying in bed, might you think to yourself, "I'm sure I didn't see anything pushing on the wire. How was it moving? Why was it moving? Is this magic?" Then you fall asleep.

Again, this bloke had friends and lived a real life. He modified his contraption and soon put it into a box, but nobody could figure out what to do with it until Guillaume Duchenne decided to tinker with it around neurons. Alas, neurons are effected by electricity. Loads of people tinkered with the idea, but it took until 1876 for someone to figure out a meaningful use for the groundbreaking discovery of electromagnetism. It took humans more than 50 years to go from figuring out we could produce an electrical current to figuring out how that current could be used in the real world. To emphasize the fact that the future doesn't build itself, "humans" writ large didn't break us out of the uncertainty surrounding E&M ... Michael did the experiment and spent a lifetime refining the equations, then a bloke named Pavel Yablochkov invented the bright induction coils in 1876.

Looking back on it now, it's completely depersonalized. Faraday went on to invent alternating current, direct current, and mathematical models of the forces involved. Tomorrow morning, Tuesday September 1, 2020 A.D., a student will read about Faraday's law in chapter 31 of her physics book.

There doesn't exist a fundamental law of physics that says the future will automatically be better than today. We, as individuals, must build it. Christiaan built the pendulum clock, Isaac built the telescope, Nikola built the radio, and Edward made the vaccine.

Steve once said, "everything around you that you call life was made up by people that were no smarter than you, and you can change it, you can influence it, you can build your own things that other people can use."

Is digital scarcity the 21st century's electromagnetism? Is blockchain one side of the digital scarcity phenomenon while DAGs are the other side? You wouldn't have known what you were looking at in Michael's workshop on Thursday night before dinner in 1821. Are you sure you know what you're looking at on Monday, August 31st in 2020?

The future isn't built by optimistic presentations, social media posts, or hopes. It certainly isn't built by words on websites. The IOTA Foundation is one hundred people trading their time on Earth to make a new version of the future possible. Those people are doing everything they can to make the pithy words on their website manifest as their reality, and that takes hours of effort every day. There's no formula for any of this, so there will be many setbacks along the way. That goes with the territory. Some surrounding projects will fail and some will survive. A few might flourish. Nobody knows until it happens.

But one thing is certain: Hoping that someone else builds the future that you're dreaming of accomplishes nothing. Hoping that prices go here or there achieves nothing. Watching is the act of standing on the sidelines. The one hundred people building the IOTA protocol, and the hundreds of projects in the surrounding IOTA community are all people just like you, working toward their own vision on the future.

Join the fray. What will you build?