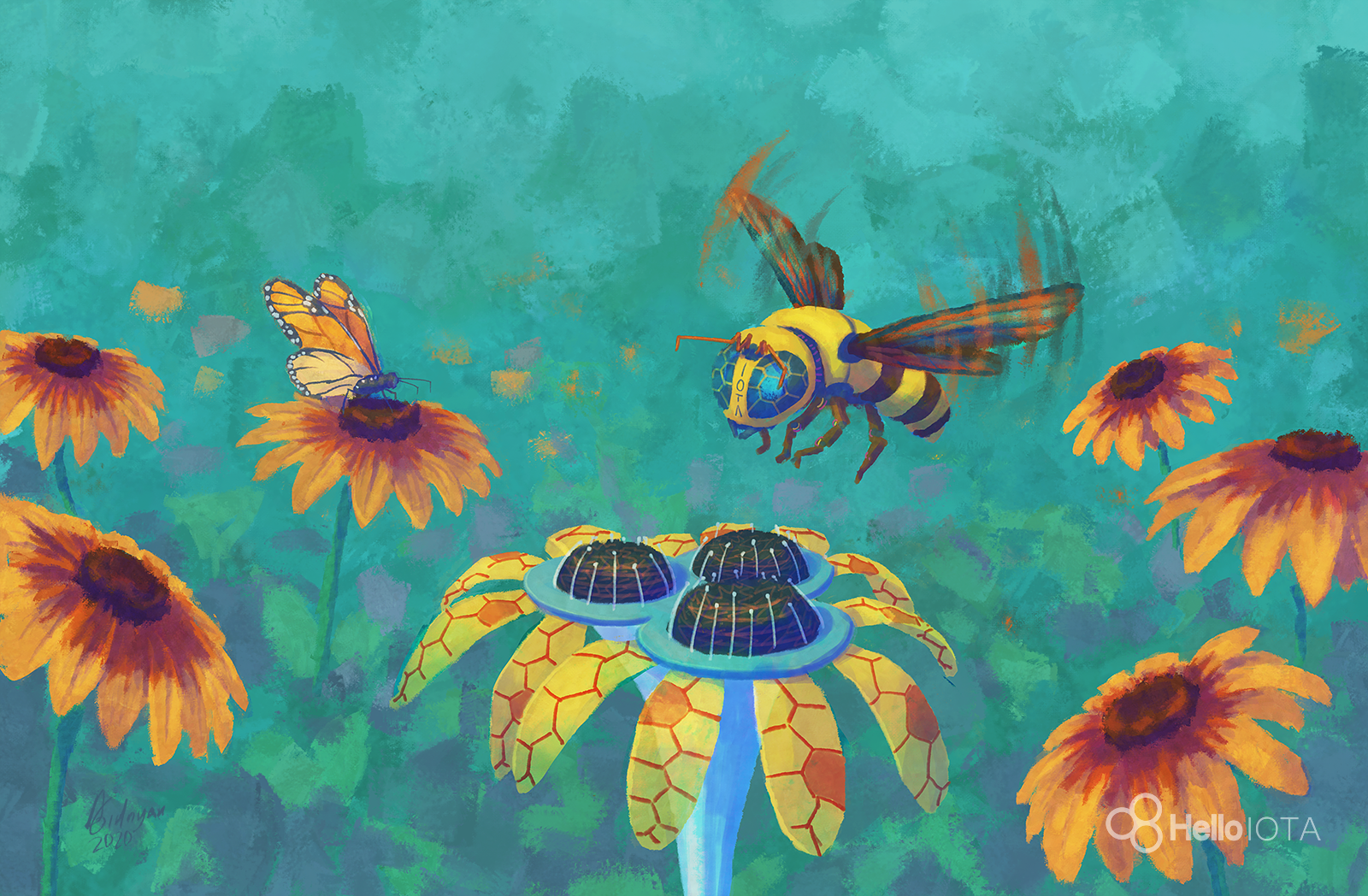 GoShimmer is the group of technologies that will lead to Coordicide (Coordicide = IOTA 2.0). Reaching Coordicide is a multi-step process, however, so Chrysalis is the name given to the intermediate phase transitioning from current IOTA 1.0 to future IOTA 2.0. Chrysalis is therefore referred to as IOTA 1.5.

We learned about the naming conventions for Chrysalis in Smoothing the Learning Curve. As a broad recap, Bee and Hornet are two software implementations that combine to make Chrysalis. That piece only dealt with Chrysalis (IOTA 1.5) terminology, and concluded:

It’s best to leave Coordicide terminology, “IOTA 2.0” terminology, and various research terms for another day ... The expectation is that this terminology will remain in flux as the researchers progressively invent the language to describe their new findings as they go.

We left IOTA 2.0 terminology for another day. Well, it turns out that day is today!

The #Pollen Testnet Is Now Live!
We're thrilled to release #Pollen, the first decentralized testnet for #IOTA 2.0. Read about the main feature updates and join us on this exciting journey towards an enterprise-ready IOTA. https://t.co/tZ5acOowti

The IOTA Foundation released naming conventions for the three stages of IOTA 2.0 for the first time last month. The stages are named after the steps in the process of honey creation, which seems appropriate seeing as how terms like "Bee", "Hornet", and "HoneycombOS" are used for Chrysalis software. The IOTA Foundation proudly proclaims that they have continued with their Apoidea naming conventions.

The foremost entomologist at the turn of the 19th century revolutionized the structure of taxonomy and was the first to classify arthropods. Today, we classify an organism by its taxonomy as broadly defined by the diagram depicted above. As you move up the diagram, the classification becomes more widely encompassing to include more organisms

Honey bees do in fact belong to the Apoidea superfamily, but it might be easier (and more granular) to refer to them as being within one of the encapsulated classifications: They belong to the Apidae family, Apinae subfamily, and Apini tribe. The Apis mellifera (genus and species - always capitalize the genus) is the western honey bee, the one which humans have domesticated for honey production and crop pollination. We owe both the 1758 naming of honey bees and taxonomic binomial nomenclature (genus and species) to the Swedish botanist/zoologist/physician named Carl Linnaeus.

The emergent complexity of honey bee colonies is a great parallel to the Tangle. But from a more personal standpoint, the IOTA Foundation's Scandinavian roots mesh well with the father of honey bee nomenclature, with which they've become so obsessed.

With that lovely phylogenic background on IOTA's Apoid naming convention, you won't be surprised to hear that the first of three IOTA 2.0 stages is being called Pollen. Go tinker with it on the IOTA github.

Pollen marks the beginning of the world’s first truly decentralized, scalable, and fee-less Distributed Ledger, which has been IOTA’s promise since day one. Pollen is the first phase in IOTA’s three-part release strategy that will culminate in our coordinator-less, production-ready network: IOTA 2.0

Pollen is IOTA 2.0's first testnet, and represents the first step toward Coordicide. Pollen will be iteratively transformed into the final release of Coordicide, which is fun to think about. A precursor to IOTA 2.0 exists right now. This testnet will allow for the validation of concepts and simulation of attacks. Pollen will be transformed into stage two of IOTA 2.0, called Nectar, by the beginning of 2021.

Nectar is expected to be an "incentivized" testnet where bug bounties will help tweak the code. And finally, IOTA 2.0 will be completed with the release of a full Coordicide specification called Honey. So, Coordicide means "removal of the coordinator", and that goal will be achieved when Honey is implemented. Honey can be thought of as the first version of IOTA 2.0!

As you can see, Coordicide is simply the humble transformation of Pollen into Nectar into Honey.

We like this analogy to honey and honeybees because bees work as a complex team and are an integral part of a sophisticated, natural ecosystem which lays the foundation for life as we know it. Similarly, the IOTA network is made up of a vast community of contributors brought together by the goal of creating a new type of fair, open-source, and distributed society.

We'll do a future piece on how complexity arises from honey bee colonies to better understand this comparison.

Pollen includes some intriguing new feature updates, most notably a new consensus algorithm, tokenized assets (colored coins), and the ability to support feeless dApps. Scalable smart contracts and sharding are two other promising features, but they're listed as "future features" on the path to Honey.‍

According to the GoShimmer FAQ, we can eventually expect transaction confirmation of ~10 seconds. Professor Popov and Professor Buchanan together wrote a paper last year titled FPC-BI: Fast Probabilistic Consensus within Byzantine Infrastructures.

This paper presents a novel leaderless protocol (FPC-BI) with a low communicational complexity and which allows a set of nodes to come to a consensus on a value of a single bit. ... We prove that ... the protocol works with high probability when its parameters are suitably chosen. ... The paper also provides explicit estimates on the probability that the protocol finalizes in the consensus state in a given time.

They suggest that it's possible to provide estimates of the probability that the protocol reaches consensus finality in a given time, and touch on the use of decentralized random number generation to increase infrastructure trustworthiness. The abstract closes by saying:

A core contribution of the paper is that it uses a very weak consensus to obtain a strong consensus on the value of a bit, and which can relate to the validity of a transaction.

Here's a discussion on the IOTA development forum about decentralized random number generation (dRNG), and here's discussion about fast probabilistic consensus (FPC). Please check out iota.cafe if you can contribute to these discussions.

Pollen wasted no time in becoming a bustling test network. You can visualize its activity by using Pollen Analyzer, and note that what you see resembles resembles the familiar tangle topology. That's exactly what it is, except this is on testnet.

The Foundation put Pollen through some testing a few weeks ago ... and we'll let these tweets speak for themselves:

We wanted to share some interesting (and very early) stats from #Pollen:
1. Over 280,000 messages have been sent between node operators with value transactions accounting for over 20,000 of them! #IOTA

2. During the process of a new #node syncing w/ the network, we recorded peak performance of up to 1500 transactions per second. We are very happy to see our early node software perform so well given the many optimizations and improvements in store for the future #Pollen

3. The confirmation time for a message on the #Pollen network is 10 to 12 seconds! This means that it takes roughly 10 seconds for a message or #IOTA token to reach its destination. This represents a 20x performance improvement from the current mainnet.

4. We’ve really made it a point to work on the usability/ux of running a node. Currently, memory consumption to run a #Pollen node is 340MB on average, with CPU usage at 3.5%. #IOTA

Finally, we conclude with a reminder that Pollen was discussed in Roundup 046, so be sure to go back and watch it for a recap.